Adult Boat Rider | Along for the ride, no dive (ages 13 and older)

Infant Boat Riders (ages 2 and under): FREE. Reservation required. Infants not allowed on tours after 9am. 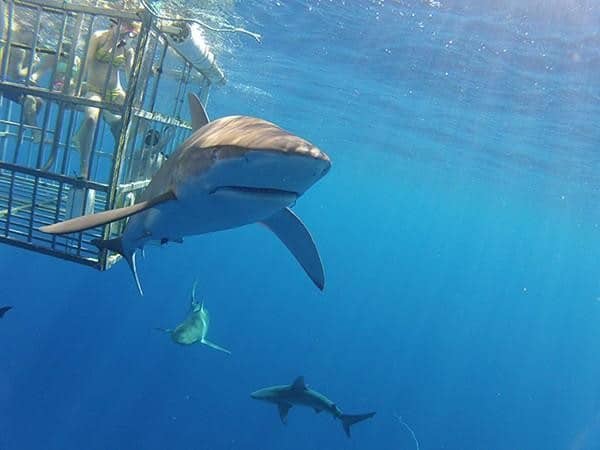 Year-round, 7 days a week.
Start times offered through out the day
1.5 hour experience

We welcome all ages and it’s completely safe!
Don’t worry if you can’t swim, our cage includes handle-bars within the cage for you to hold-on to.

The first tour starts at 7 am with the exception of June through August when the first tour departs at 6 am. Additional tours occur up to 11 am and, depending on availability, later tours are available. Each tour leaves Haleiwa Harbor and lasts approximately 2 hours. Our fleet includes custom made aluminum boats, the 36 foot “KAIOU”, and the 42 foot “ABUNAI” which includes a canopy for shade and cushioned seating for comfort. With your safety in mind, we hold an informative safety briefing at the beginning of each tour followed by a brief history of the shark tours. Masks and snorkels are provided, however, you are free to bring your own (fins are not necessary). The sharks we see range in size from five to fifteen feet which are often inches away from the cage and the spectators inside.

We’ll travel offshore three to four miles to our cage moored in the beautiful cobalt blue water. The visibility is so good (often 150 feet or more) that you can actually see the sharks come up from the deep. Our cage can hold up to 8 people comfortably which allows small families to experience their shark dive together. No chumming is necessary as the sharks are attracted to the sound of our motors which they interpret as a crabbing vessel and a potential food source. Guests are encouraged to bring their own underwater cameras for the opportunity to capture the best footage of Hawaiian sharks anywhere. Disposable cameras and a video option are also available for purchase.

The shark is nature’s most perfect predator and have existed for over 350 million years, even before the time of the dinosaurs. The sharks featured on this tour include the Galapagos and Sandbar sharks with occasional sighting of a Tiger shark but you’ll never know what might show up.

In Hawaiian legend, each island has its own shark god. It was said that, Kamohoali’i, the king shark god of Oahu, was a ferocious man who was able convert between “shark” and “man” at his choosing and provided the canoe which brought Pele to Hawai’i from Tahiti. He lived in an underwater cave off of Pearl Harbor and is the elder brother of the fire goddess Pele. Don’t worry, we are not visiting Kamohoali’i.

The ancient Hawaiians hunted shark for many reasons. Their meat was consumed, their teeth for weaponry, and their skin mainly for drums. The shark was held in reverence by the Hawaiians and many families inherited the shark as their ‘Aumakua, or Family God, Guardian Spirit, Protector. And to honor their familial protector, Heiau, or shrines, were built on land in honor of their ‘Aumakua.

We will bring you face to face with the shark as they rise from the depths for an unforgettable experience, a primal adventure you will always cherish.

North Shore Shark Adventures has been featured on the BBC Outdoors in England, ESPN Outdoors, Canadian Wildlife Television, Wheel of Fortune, The Travel Channel, MTV, the Playboy Channel and many more. Companies have also joined our tour for inspiration for new products. Guests from almost every part of the globe have enjoyed the sharks with many of them swimming in an ocean for the first time in their lives. And almost all guests who arrive with a phobia, or fear, of sharks have seen their inhibitions dissolve to a greater respect for sharks and their gracefulness.